We were recently able to tour a Frank Lloyd Wright gem in Wichita, Kansas.  The house was commissioned in 1915 for the Allen family and was completed in 1918.  The house is built in his Wright's signature "Prarie Style" and is considered one of his finest examples of that style. 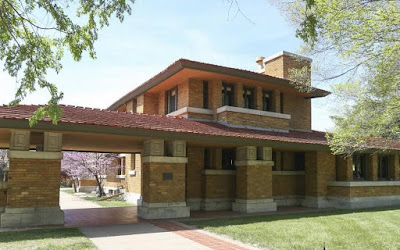 The house has undergone restoration to bring it back to it's 1918 appearance and it is listed on the National Register.  The house stands in stark contrast to it's Victorian style neighbors that were built around the same time. 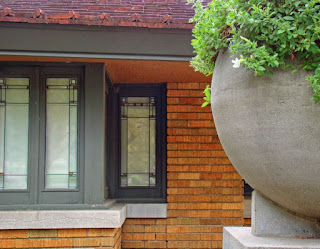 The exterior features textured brick in tones of yellow, orange and brown.  The house is accented with stone from Carthage Missouri and cast concrete pieces like the round planters.  It was stated on the tour that shells were ground up in the concrete to help it match the color of the stone. 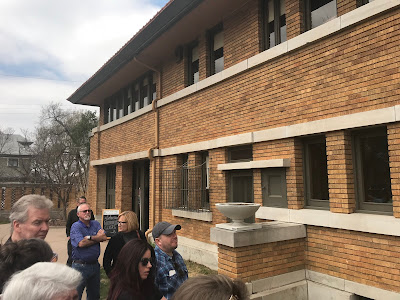 The house has several conveniences of that era.  A few are shown in the photo above.  The dark box under the eve was part of an alarm system.  The bars on the kitchen windows were actually to protect and cool food and keep and keep it safe from animals.  The small door near the planter allowed the delivery man to deliver ice right into the ice-box in the kitchen.  The house also had an attached (and heated) garage which now serves as the museum gift shop. Inside the house had a central vacuum system and wall hung toilets. 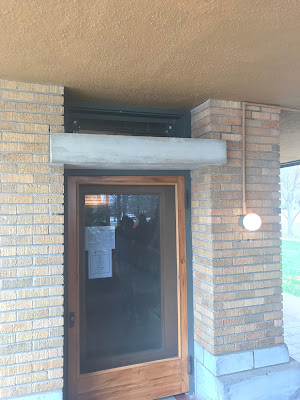 This is the front door to the home.  Note that the top piece of the wood has been shaved down over the years.  The tour guide indicated that this was due to the house settling. 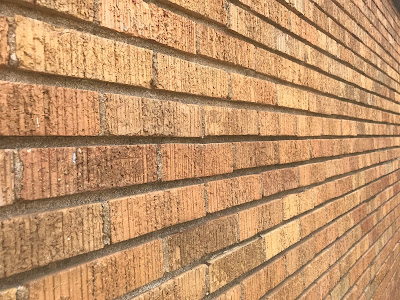 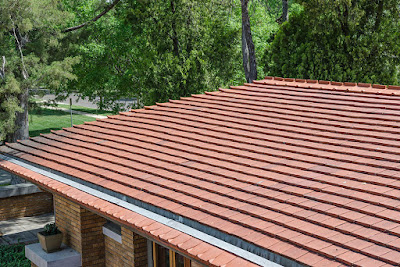 I included this photo to point out how Wright "hid" the rain gutters by recessing them in tile roof.  The rain water was collected in cisterns and used to fill the reflection pool.  The gutters are not visible from the street. 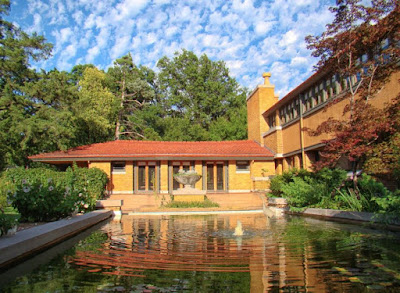 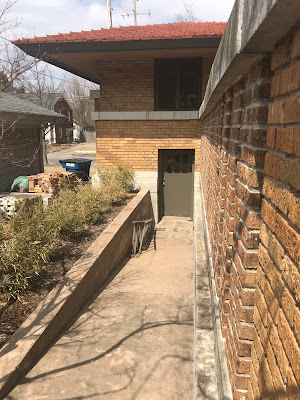 There is a small pool house on the site and here is the view from behind.  This small basement room was used to store the landscaping tools on the site. 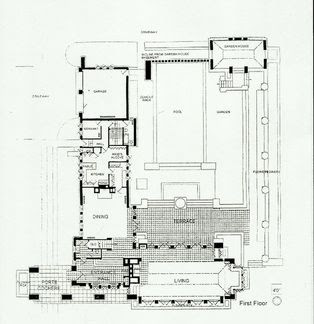 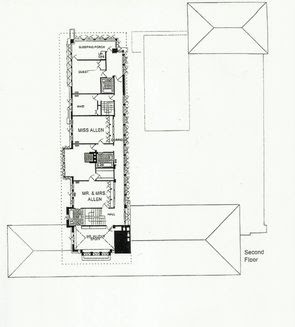 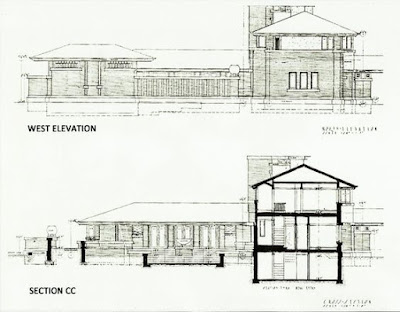 The basement was not occupied space and housed the boiler room and laundry. 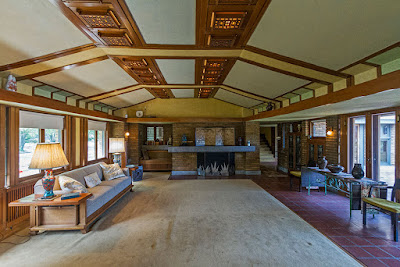 The large living room has a fireplace and inglenook at one end (above)and some built in shelves (below) The couch is one of two original Wright couches in existence.  The fireplace screen was acquired by the Allen family in Paris in the 1920's-1930's.  The ceiling has built in lighting behind wooden carved screens with paper shades. 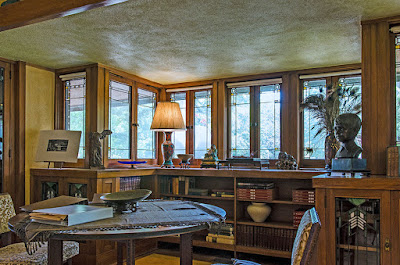 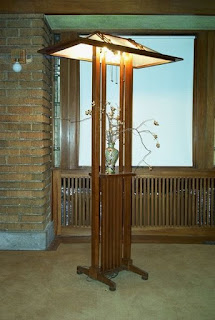 One of the 30 pieces of original Wright designed furniture is this floor lamp in the living room.  Notice the built in wooden screen to hide the radiators along the wall. 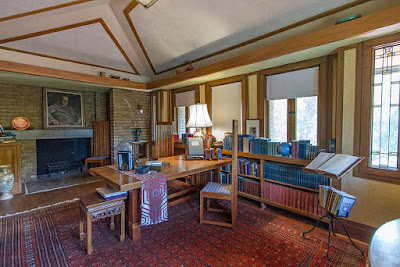 One of the public spaces upstairs was Mr Allen's study.  This room also contained a built-in cabinet with metal lined drawers to store some of Mrs. Allen's art.  Many of the rooms have shelf space up high to display art and knick knacks. We were told that Wright thought that art should be displayed and rotated around a couple of times a year.  The portrait above the fire place is Mr Henry Allen who was the U.S. Senator of Kansas from 1919-1923. 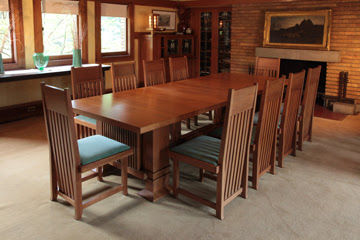 This is the original dining table and chairs that Wright designed for the home.  It can expand to seat more. Note the built-in cabinets and lights which flank each side of the room. 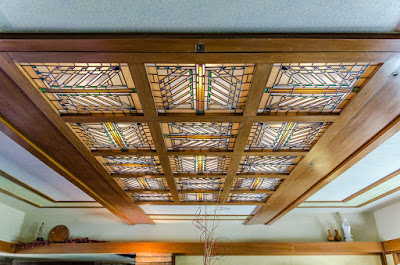 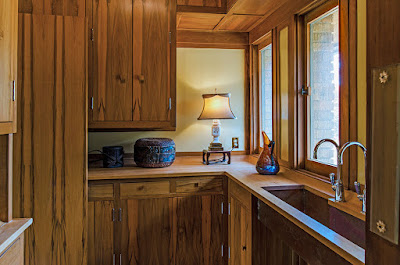 This is the butler pantry which separate the dining room and the kitchen.  Note the recessed copper sink. 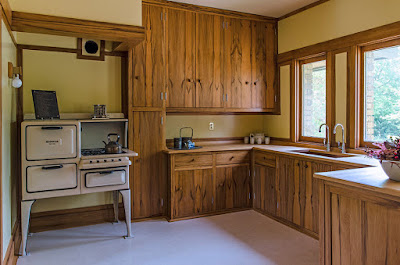 The kitchen is actually pretty modern looking for something that is over 100 years old. 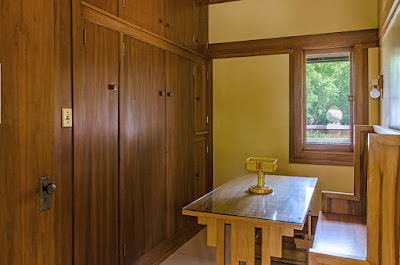 Wright designed this bench and table for the staff in the kitchen. 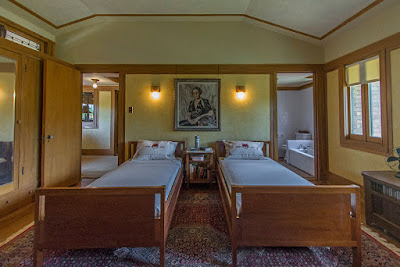 The master bedroom (above) has it's original furniture and a portrait of Mrs Allen.  Note the built in closets to the left and the art glass transoms above.  Central heat and air conditioning was not added to the house until later.
Posted by Troy at 9:26 AM 7 comments: Links to this post